Below video is posted with permission, courtesy of Defend H20.

Below excerpts are borrowed courtesy of a December 10th article and video published by Vox. The full article is available here.

About 80 to 90 percent of sandy beaches along America’s coastlines are eroding. This is a problem because the developments humans build near them are static. So as beaches shrink, coastal hazards can threaten to damage or destroy homes and businesses while negatively impacting tourism that depends on the beach.
The most popular strategy to counter these risks is a process called beach nourishment. Coastal engineers will add new sand to an eroding beach in order to rebuild or expand the shoreline.
But researchers discovered that coastal defense schemes like beach nourishment may ultimately do more harm than good by providing a false sense of security in critically eroding areas. There is evidence that beach nourishment can “mask or reduce the apparent impact of coastal hazards without changing the natural processes driving them.”
Visit the original article here. 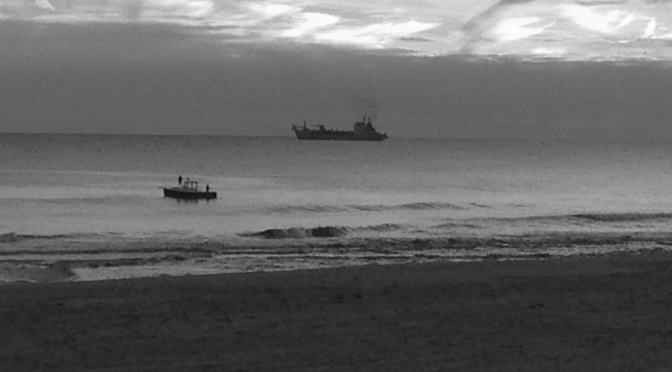 The Quogue shoreline has been transformed since the October storm and the Jonas storm on January 23rd. These storms have decimated areas on the western end of the beach, in areas where a hopper dredge has been removing sand and transporting it to Fire Island since last spring.

The coincidence of these factors inspire a few questions. Among them…

Conspicuously, the areas that have suffered the latest erosion are those westward of the dredge. The west end is now jagged, with cliffs ten feet high and severely eroded.

Ironically, the US Army Corps of Engineers’ own research has long recognized that “hot spot” erosion can be caused by offshore borrow sites that are poorly designed and located too close to the beach. Click here to access the report.

Decide for yourself if the unintended consequences of dredging seem worth the risk. 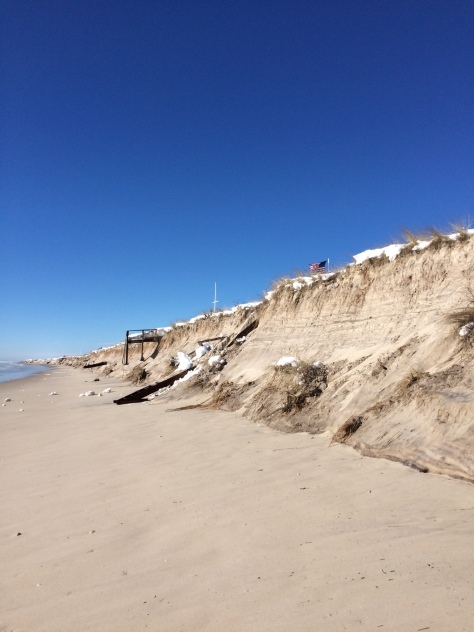 Above: A possible combination of nearshore dredging and storm tides during winter storm Jonas have cut away at Quogue’s western dunes and exposed old beach access stairways that had been buried for the last 30 years.

Concerned Citizens of Quogue, Inc., (CCQ) is a not-for-profit organization incorporated in 2013, whose members share a strong interest in protecting Quogue’s 2.7 miles of ocean beach and dunes, which are unquestionably the Village’s greatest assets. We are homeowners, taxpayers, voters and both summer and year-round residents. We share concern for the environment, especially as it pertains to coastal erosion, global warming and rising sea levels.

• To establish a liaison with Quogue leaders and trustees to help create Plans designed to protect, grow, and sustain our dunes and beaches